The anti-kidnapping unit of the Imo police command led by SP Linus Nwosu has put to a halt the evil activities of a deadly kidnap syndicate terrorizing the people of the state.

This is following the successful rescue mission it operatives embarked upon that led to the freedom of a Monarch from Okigwe and the secretary to the Okigwe local government council.

The duo victims were held captive for four days until the police crack in on their adopters and arrested five of them.

Speaking while parading the suspects on behalf of the commissioner of police the command's PPRO SP Orlando Ikeokwu alongside SA security to the governor reiterate their commitment to making the state crime-free, even as others bare the mind on the development.

The rescued victims, however, narrated their ordeal in the hand of the bandits.

The TC Chairman of Okigwe local government council Hon. Nkechi Nbonu who came to collect them back home to their loved ones express gratitude to God for the freedom of her people, she thanked the operatives of the anti-kidnapping squared for their gallantry disposition while saluting the state governor Sen. Hope Uzondimma for providing necessary support for security agencies in the state hence the proactive and swift response been witnessed. 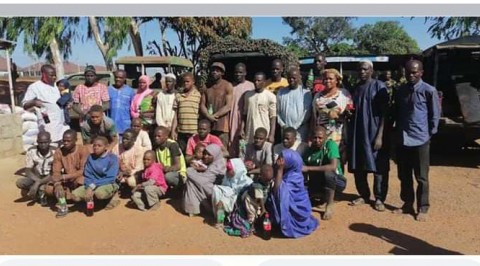